The Alexander Technique offers people living with Parkinson’s self-management strategies that can help them gain more control of movement patterns, with potential improvements in balance, posture and walking. It can enable them to participate in everyday activities with greater confidence and minimal interference from symptoms.

The Walter Carrington Educational Trust at the Alexander Technique Centre aims to further the work of F. M. Alexander and make it more available to people living with Parkinson’s. In Autumn 2016, the Trust supported four teachers of the Alexander Technique to receive specialist training and gain more experience in working with this population. These teachers have developed and delivered several group introductory workshops for people affected by Parkinson’s, as well as a continuing professional development programme for other Alexander teachers. In February 2018, the Trust sponsored six more teachers have joined this initiative to receive specialist training, and in 2019, ten more teachers benefited from the teacher training programme, this time with assistance from both the Trust and Parkinson’s UK. Two afternoon workshops for people living with Parkinson’s – including carers – were offered on 8th and 15th February, 2019.

The activities since 2016 include:

All teachers involved are fully qualified teachers of the Alexander Technique and have undertaken special training in working with people living with Parkinson’s. These are the four teachers who have pioneered this initiative together with the Trust:

Liz Dodgson trained with the Carringtons about 16 years ago, and runs a private practice from home and from Roko Gym in Chiswick. She particularly delights in helping people to be able to return to enjoyable, pain-free activity and works regularly with runners in particular. Having had only one student with Parkinsonism during her sixteen years of practice prior to this initiative, she feels that a concerted effort may be needed if the benefits of AT are to be brought to this community.

Loretta Manson trained with the Carringtons at the Constructive Teaching Centre in London, graduating in 1997. She teaches at The Bloomsbury Alexander Centre in Holborn and at The Alexander Technique Studio in Wandsworth Common. A keen dancer from childhood, and now very involved with Lindy Hop and Argentine tango, Loretta was diagnosed early on with scoliosis and multiple joint problems. First-hand experience of living with long-term pain and fatigue gives Loretta particular insight into the challenges faced by pupils in need of relief from tension, pain, backache, low energy and mood. Loretta values the Alexander Technique as a constructive approach to managing our individual limitations and living as fully, freely and joyfully as possible.

Dai Richards trained with Carolyn Nicholls in Brighton qualifying in 2012 and currently teaches full time in Ditchling near Hove, West Sussex. He has a broad and varied experience of working with movement, injury and recovery. He has an excellent track record of helping people with their painful conditions as well as performance in running, cycling, swimming, dancing, and skiing through the Alexander Technique. Recently Dai has been particularly active in taking AT into the traditional workplace.

A compilation of information on the Alexander Technique for Parkinson’s may also be found on the website of the American independent nonprofit organisation The Poise Project. 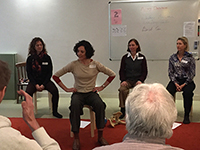 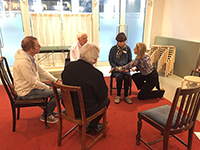 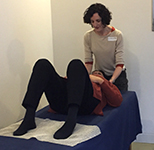 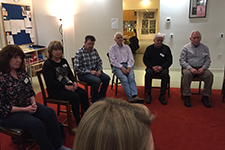 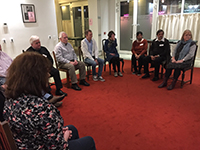