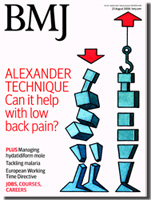 The Alexander Technique is a well-established educational method for improving freedom of movement and enhancing performance in all activities of living. It achieves this by teaching conscious awareness of use and functioning; by the prevention of unnecessary muscular effort and tension; by allowing for the expansion and lengthening of the total muscular system. The Technique is used to reduce effort, for pain relief, for improving posture and breathing, and by many performers for greater ease and accuracy of movement. It is part of the curriculum in music and drama schools throughout the UK.

A major randomised controlled trial of Alexander Technique lessons was published in the British Medical Journal in 2008. Its main conclusion was that one-to-one lessons in the Technique have long term benefits for patients with back pain.

What is the Alexander Technique?

The Alexander Technique is a method of self-help. Its purpose is to help people to avoid doing things that are harmful to their general wellbeing. The method is unique because, unlike most systems that advise people what to do or how to do it, this teaches what not to do and how to prevent it. Thus the Technique requires, first of all, a practical demonstration, conveying the experience of what actions are wrong; and then clear instruction as to how they can be avoided.

The Technique originated as long ago as 1894 from the experiences gained by F. Matthias Alexander concerning his use of voice, as an actor and performer of dramatic recitations. He had no scientific training in anatomy and physiology, but observation and experiment led him to acquire knowledge so that he was able to overcome the problems of speech and respiration that had beset him. When certain eminent scientists subsequently experienced his work for themselves, they asserted that it satisfied all the criteria of scientific method.

Why then is the Alexander Technique so difficult to describe in simple words? Why, on reading accounts of it, do literate and scientifically educated people often fail to grasp its significance?

On the one hand the concept of “not-to-do”, of “thou shalt not”, can evoke negative emotional responses which confuse the issue. People prefer to be advised what to do. They look for positive instruction. On the other hand, the scientific significance of what Alexander observed as he stood in front of a looking-glass can scarcely be appreciated by a reader without some technical knowledge of balance, movement and posture.

He established empirically that in posture and movement his neck must not be stiffened, but that his head should be allowed to adopt a certain preferred attitude in relation to his neck and body (described by him as “head-forward-and-up”) and that this was consistent with a free, alert attitude or state of poise.

Recent scientific research concerning head orientation and posture in vertebrates indicates that there is a preferred head orientation which animals maintain through a variety of behaviours. It is associated with an alert posture and an extensive acrobatic capability. In living vertebrates it involves maintaining the semi-circular canals, or the lateral semicircular canal, (a part of the organ of balance or the vestibular apparatus), in an attitude approximately level with the horizon.