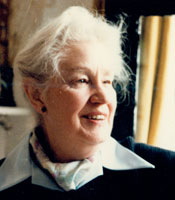 Dilys Carrington was the Co-Director of the Constructive Teaching Centre who made important contributions to the development of the teacher training programme.

Born in 1915 in Stourbridge, Worcestershire, she was educated at Kings’ High School for Girls, Warwick, and Bedford College, University of London, where she studied Mathematics and Psychology.

In 1938 she started having lessons with F. M. Alexander and later in the same year she became his secretary at Ashley Place, the home of his training course and private practice.  Here she met Walter Carrington whom she married in 1940.  Dilys started her teacher training with Alexander shortly before his death in 1955, and went on to complete it in 1960 with Walter.

Walter and Dilys’s lifelong marriage was a very happy one, and also a collaborative partnership. Together they ran the Constructive Teaching Centre. From 1981 until 2001 Dilys ran the ‘morning’ group (the students in their first year). She developed a logical and systematic set of procedures for hands-on work for first year students which has been adopted by many training courses all over the world. (The procedures were recorded in Notes Towards a Method for Training Alexander Teachers by Lynn Nicholls, in 1986. Some of her teaching procedures were also recorded in Directed Activities by Gerard Grennell, 2002). She wrote several brief, but important, articles for teachers on subjects such as walking, and the use of hands.

Quiet, unassuming, Dilys was always reluctant to speak publicly about the work to which she devoted fifty years of her life, but her teaching made an enormous impact on every student. She was patient, never overbearing or fussy, and kept a keen eye on the beginners, making sure they were secure. She always made sure that students understood what she was saying, even if that took time.

Her natural frugality was legendary and necessary. She managed to deal with the many demands of the older property in Lansdowne Road, where she and her family lived for 49 years, and where the training course was located, within a strict budget. However, her generosity to individual students in times of need always took priority over economic considerations.

The students who had the privilege to have had Dilys as their teacher experienced the certainty of her direction. Although she held no religious belief herself, her own spirit, creativity and direction was part of the gift of her life to them all. Her straightforward, no-nonsense, approach to the work remains as a living example and inspiration. In a moving tribute on the occasion of her 90th birthday Walter said “I do not think people realise just quite how much Dilys has done for the Technique”.

Dilys Carrington died 22nd September 2009 at Lansdowne Road at the age of 94.